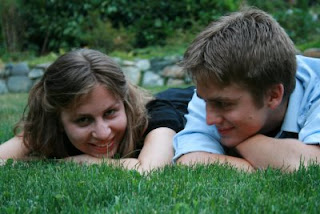 It's been a month since my son Nathan was married to Colleen McMurray. The new Mr. and Mrs. Sleadd came home from their honeymoon two weeks later and found out she was pregnant! They had hoped for such a result. YippEE!! I realize it's a shock to the sensibilities of some folks that two people getting married might want to start their family right away, but I have said to my children: If you're not ready for a family, you're not ready to get married! It is quite different advice than we received when John and I married, and we thought we needed to "wait" since that was the prevailing wisdom, after all, "You need some time for just the two of you". My answer to that now is, "Well, they always get nine months!"
With our children following the courtship model, and their dad doing his job, they known their future spouses from the get-go much better than most marrying couples do nowadays. We help them determine if they are ready financially and spiritually, so when all lights are green, we say, "You're ready for children!" So far, our two married children, Naomi and Nathan, are following our advice. Naomi is expecting #2. I'll have two more grandchildren in 2009. What a lot of fun!

For pictures of the wedding see Alexa's blog: mylifecompiled.blogspot.com.
Posted by Del Snedra at 9:01 PM No comments: 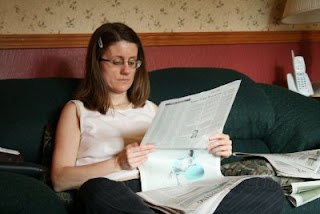 I have some more blessings to enumerate. I am teaching--no, facilitating a Physics class for five teens in my home, two of which are my own. 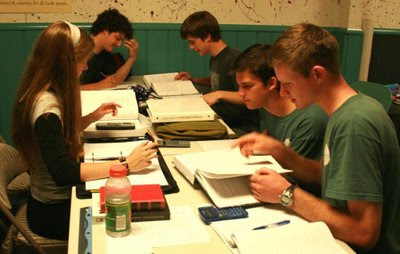 These young people are joy to work with. We have fun and laugh in the midst of some pretty heavy, heady discussions about Newtonian physics, Einstein's theories, and how God is in all and through all without being part of His Creation. I am thankful for Tait, Dylan, Jachin, Aaron, and Alexa as they bring added spice to my life. Thanks, you guys!
Posted by Del Snedra at 8:43 PM No comments:

I am so thankful for Thanksgiving! This year we are hosting 25 people at our house. I have a new daughter-in-love, Colleen, who is trying to fix the turkey in the midst of morning sickness (pray for her); and my eldest Naomi has taken on the planning of the meal. She has delegated all the yummy food out and there will be plenty! My mouth is watering already.
It is time to count up my many blessings. In spite of a looming economic crisis and Obama presidency, our lives continue much the same, so far. Our needs are well-supplied in abundance. We are paying our mortgage down ahead of schedule, even while increasing medical expenditures and ordering orthodontia for Alexa. The gas prices are back down below $2 a gallon after exceeding $4 just weeks ago. And all my children are in the faith, by all appearances and professions. What more could I ask for?!?
I do pray that America will return to its heritage. That's why I wrote a Pilgrim Trivia quiz to use on our feast day; my children and grandchildren will know the truth of their forefathers and hopefully emulate them. If you would like the file of the quiz, email me for it at cbfm@charter.net.
Posted by Del Snedra at 8:21 PM No comments: