Back home from Kauai 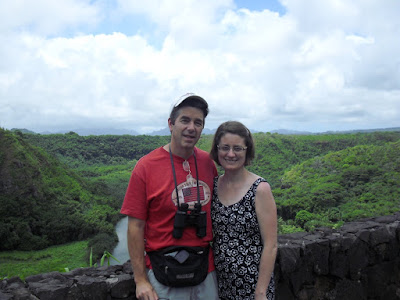 YAY!! I made it to Hawaii and back! It was amazing. God is so good!
I can think of four factors in helping me feel better than I have in years while on Kauai Island. One, many people were praying for me, specifically for my health. Two, my husband was very attentive to my constant demands ("You need all SEVEN pillows to carry on the plane?") and he uncomplainingly carried or dragged every piece of luggage by hand, on wheels, strapped together or slung on his back and front. Three, the airlines were very willing to provide wheelchair assistance at every point in the itinerary. Four, and probably most importantly, I had all the time in the world to swim every day--usually twice a day--in the hotel pool. Ahhh!

I still dealt with pain, and was reminded of its threatening presence when we encountered one short stretch of washboard-type road which jostled my stomach and abdominal muscles badly. But I recovered quickly, and had no other stomach problems. The day we were scheduled to depart from G.P., I had a very crampy stomach, up until THE MINUTE we left. I mean, the MINUTE we were headed for the airport my stomach loosened back up. (I did take meds for that purpose and they worked well that time; they don't always, and have the side effect of dry/sore throat which is bothersome.) 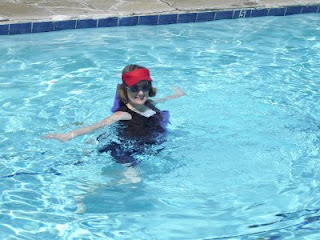 Actually, there are two more reasons I may have done so well. Fifth, I had help from some of my lady-buddies from church with the packing and errands. (Mahalo, Leanne and Jen.) And sixth, the islands have the highest oxygen levels in the world, so they say; I'll have to research that to see if it's true. The air there really is wonderful. It's very humid and has a sweet smell to it.

We stayed in a hotel on the east shore (Kauai Sands) and spent most of our time exploring the north and east shores, with the final day spent on the south shore, where we would like to spend more time if we ever return.
Some highlights: 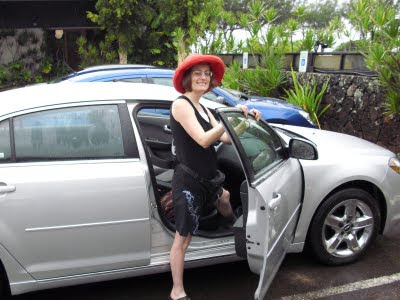 We rented a mid-size Malibu for the price of an economy car from Alamo because by the time we had stood in line for over an hour they had run out of economy cars. A nice trade-off :). (Thank you Kelly for helping us find a discounting agent.) 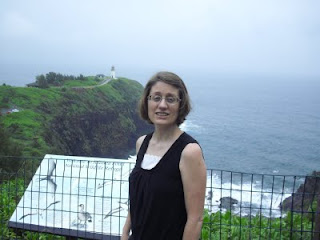 2. Kilauea Point Lighthouse and Wildlife Refuge
It poured monsoon-like as we walked up the trail to the lighthouse. My raincoat and John's poncho served only partial coverage. No matter. It was very warm. A little rain (or a lot) would not dampen our spirits. The cyclone Felicia that was due to hit the islands the day we arrived, downgraded quickly into just a lot of rain and wind. Mahalo, Lord! Besides the unusual sea birds, we also saw a baby bird in its burrow right by the trail. Awww...oh, and a seal on the rocks below. (Thanks, Mom for recommending binoculars for this place.) 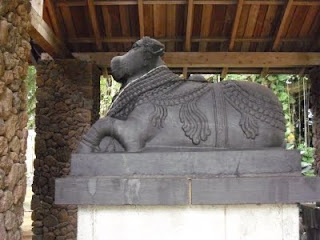 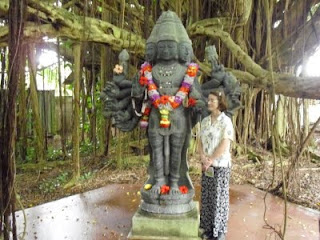 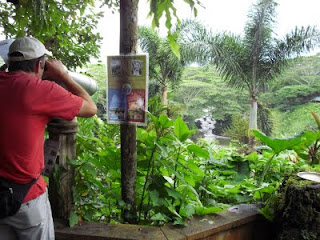 3. Kauai's Hindu Monastery
Quite an impressive place. The garden is admittedly peace-inducing and beautiful, the temple setting breath-taking. As we entered the building, which had a sign telling us to take our shoes off and enter with "an attitude of worship", I whispered, "We enter with hearts that worship the Lord Jesus Christ." His image was obviously not among the idols. They didn't convince us to join up (relieved?). We went away reminded of the freedom we have in Christ and the joy of coming boldly to our Heavenly Father, knowing that all the work has already been done for us. 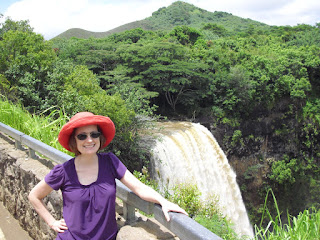 See the brown stripes in the water? That's the storm's effects: red clay dumping into the rivers and bays, resulting in very murky beaches lasting a week. These falls usually have two separate streams, but the excess waterflow united them into one big rush. There were Tropicbirds, with their long ribbonlike tails, swooping in figure eights below in the mist; very cool. (Hey, I could join the Red and Purple Hat Club now! No?) 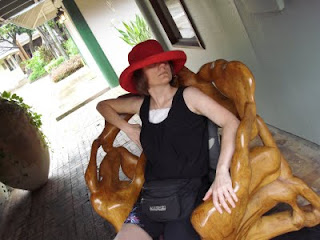 5. Coconut Marketplace, Kapa'a
This shopping center within walking distance of our hotel is in foreclosure. Sales are down 30-40% from a year ago, and half of the spaces are vacant. I don't remember the type of wood this chair I'm sitting in is made of. Do I look like I care?

6. Eggbert's/Hula Girl Grill
I had a mouth-watering Seafood Omelette for breakfast, and Opa Fish w/ sauteed Mushrooms for dinner here, in the Coconut Marketplace. John's clam pasta was unremarkable. 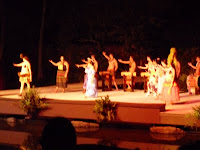 7. Smith's Tropical Paradise
We splurged on one luau, and went to the "Best" one, according to The Ultimate Kauai Guidebook. (Thanks for lending it to us Kelly--it was indispensible, but is a little worse for wear :P) The Smith family's luau is located in a botanical garden and includes a tour of the garden, pig-cooked-in-a-pit-Hawaiian-style ceremony, a free shell lei, a nice dinner, and a fabulous stage show with all the traditional polynesian dances. 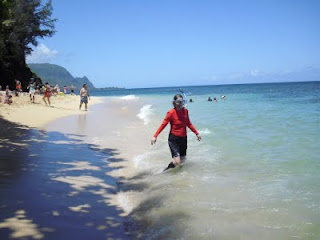 8. Hideaways Beach, Princeville
Finally on the sixth day we set out at 7:30am to find a beach with water clear enough for snorkeling. We tried three sites and the third try was charm. The view from the top looking down at the beach was spectacular; the makeshift trail down the cliff was not. I was afraid I would be overtired trying to climb back up; John promised he would "get" me back. I knew there was no way he could carry me up that cliff, but I went for it, and I'm glad I did. My mask kept leaking and I couldn't see without my glasses, so I gave it up, but John succeeded and delighted in coaxing a scad of tropical fishies up to his hands. He was like a kid in a candy shop under water. And he pushed me from behind, back up the cliff trail, after which I wasn't the least bit sore! Mahalo!
I was fanatical about avoiding sunburn, and wore a long-sleeved rashguard shirt for snorkeling. It worked like a champ.


9. John's beachcombing souvenir
On Kalapaki Beach (which had chocolate-brown seas), John rummaged through some driftwood for a good souvenir. He picked up a PVC corner and said, "This looks suspiciously like a PVC corner." I said, "It could be worth a couple bucks!" I was teasing, but I guess I convinced him it was worth keeping. Back at the hotel he discovered a crack in it. We threw it away, but got a picture for memory's sake.

10. Poipu and Spouting Horn
OH! The best for last! The day we were to leave we saw everything we could on the south side of the island, and what a treat it was. 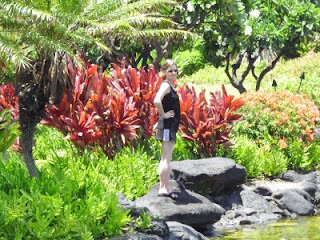 The Grand Hyatt Hotel was spectacular (we had seen the Marriott in Nahwiliwili, which was on the same scale but excessively ostentatious somehow) and its water slides made John comment, "Oh the kids would love this!...I wonder how cheap a room you could get here..." Ha!!
We also had the thrill of spotting some sea turtles in the waves, and ate Puka Dogs at the Poipu shopping center, at our friend Sean's suggestion. MMM-MMM.

Then, to top it off, we saw the Spouting Horn. Wow!


In a little open-air craft fair by the Spouting Horn, John bought me a sterling silver ring for our silver anniversary. It was only $10 and probably worth every penny, but I am very pleased with it.

The return trip was cold. The plane rides to Hawaii were all hot and stuffy or normal temp, so I decided not to carry on a coat on the return flight. Big mistake. After we had already checked in our baggage and about to board in Lihue, we were told at the gate that the feds had confiscated all the airline's blankets and pillows due to the swine flu scare, and that if we wanted any wraps we should get them out and ready before boarding. By then it was too late. The 5-1/2 hour flight was FREEZING. I at least had long pants to put on; John just had his shorts and short-sleeve shirt on his back. He covered his knees with napkins and wore a Winco bag over his chest :). His one consolation was that his sunburn didn't suffer from heat. It was a nighttime flight, but we didn't sleep much.

Then we had a 10-hour layover in Portland, which was thankfully reduced to seven hours by going on standby on an earlier flight, but the PDX terminal was also FREEZING while outside it got up to nearly 100 degrees. Of course, they don't let you go outside for awhile anywhere once you're through security, so we froze--until we got to the Medford airport where it was 105 degrees outside.

I forgot to mention that we visited Kauai Reformation Church on Sunday and met some folks who were formerly from OR and CO who know mutual friends. It is a church plant of Oceanside United Reformed Church with about 40 attendees, and they have had a pastor for only two months. That afternoon, John checked out Waimea Canyon and Kalalau Valley while I rested in the hotel. He also hiked up to the top of Sleeping Giant earlier in the week.

Oh, I could go on some more, but this is probably more than you care to know. A-LOHHH-HA!
Posted by Del Snedra at 4:47 PM

I am so excited for you!! I am soo glad you went!! I am happy that you had a good time and that you felt decent while you were there!! YAY GOD!! did you feel better enough that you want to try to move there? hehehehe :) Get some rest and enjoy being home!!

Aloha! Welcome back! Thanks for the report- it looked like a fun trip!
Peggy

Your pictures are beautiful!! I'm so happy that you & John had such a joyous time! God still amazes me with His miracles (big & small)!
What a glorious time full of precious memories!
Glory be to God!

Glad to hear you and John had such a wonderful time exploring such an Edenic locale. Welcome back!