The cultural slide into the workplace 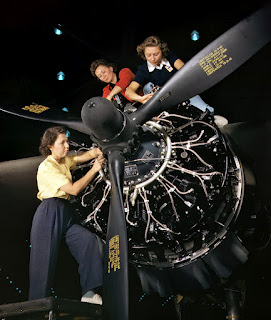 So I was looking at these beautiful color photos taken during the war effort in WWII, in which America's women were building warheads and airships so their men could defend the country (click below).

And I pondered the women manning the factories. I consider it unfortunate that the "emergency" conditions of wartime then became the basis for peacetime practice. Once they were in the workforce, fighting for freedom and America so the boys could serve in battle, many women saw little reason to return home. It no doubt felt more glamorous and fulfilling to be with adults in the daytime, rather than staying home with children, who showed little gratitude, made messes, and could just as easily be sent to the state babysitter-- er, I mean, public school.

I too found it difficult when my eldest two children were babies to find life at home fulfilling. I taught part-time in the public schools as a music and math teacher. I liked being around adult teachers from whom I received encouragement, and the paycheck I brought home gave tangible evidence of a job well done. It was so seductive, so appealing. At the same time, I fought feelings of guilt, that I wasn't caring for my children well. It was a miracle how God worked in my heart to bring me home with contentment.

This link will take you to a site with more Kodachrome color photos taken during World War II.